For centuries, the Irish public house has been an integral part of Irish social culture. In Ireland the local pub is a pillar of the community the same way the local church would be. It functions as both a place to consume alcohol at leisure as well as a place in which to meet and greet the people of a locality. In many cases, Irish people will have one (or more) pubs which are referred to as ‘the local’ which is the pub which they frequent most often.

There is generally a very close and mutual understanding and informality between the customer and the staff and, in many cases, particularly in country pubs, virtually all of the regular customers will know each other very well. That warm and friendly atmosphere extends to outsiders as well and it is not uncommon for strangers or tourists to be drawn into conversations with locals. In addition to the casual social atmosphere, hearty food and drink, sports, and traditional Irish music are hallmarks of pub culture.

Food is usually simple and traditional featuring classic Irish dishes like Irish stew, boxty, and Irish soda bread. Drinks include a variety of spirits and beers on tap but one can certainly expect Guinness and Irish whiskey such as Bushmills or Jameson.

Irish pubs with televisions frequently show Gaelic games such as Gaelic football or hurling. While not all Irish pubs will feature live Irish music, it is an important part of the culture.

Irish traditional music sessions are mostly informal gatherings at which people play Irish traditional music. The general session scheme is that someone starts a tune, and those who know it join in. Good session etiquette requires not playing if one does not know the tune (or at least quietly playing an accompaniment part) and waiting until a tune one knows comes along. In an “open” session, anyone who is able to play Irish music is welcome. Most often there are more-or-less recognized session leaders; sometimes there are no leaders. At times a song will be sung or a slow air played by a single musician between sets.

The objective in a session is not to provide music for an audience of passive listeners; although the punters (non-playing attendees) often come for the express purpose of listening, the music is most of all for the musicians themselves. The session is an experience that is shared, not a performance that is bought and sold.

The sessions are a key aspect of traditional music; it is the main sphere in which the music is formulated and innovated. Further, the sessions enable less advanced musicians to practice in a group. 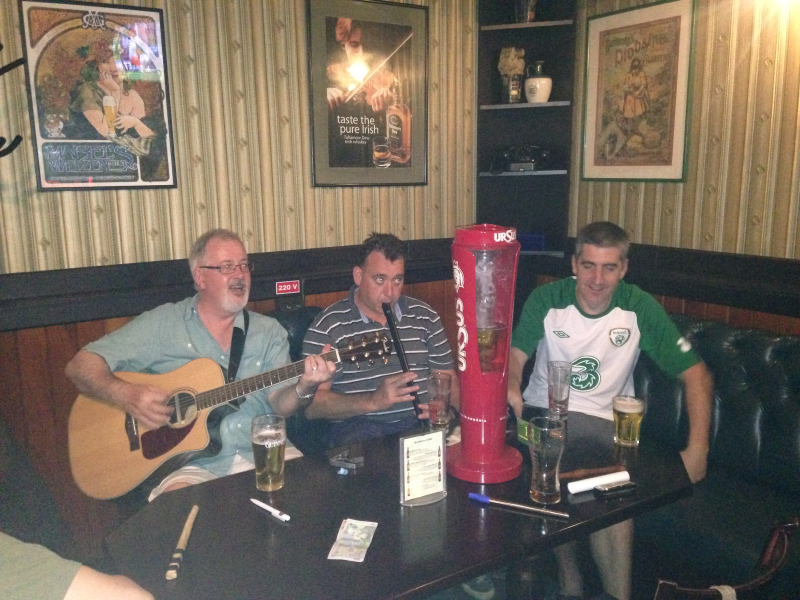 It is traditional that, when with a group, patrons take turns buying rounds of drinks for the group as a whole. It is considered bad manners to leave before buying your round of drinks. The traditional Irish toast is “Slainte” (SLAWN-chuh) which is the Gaelic equivalent of “cheers”.